Even if we put "knowledge" (3%), "training" (4%) and "skills" (4%) we will have only 11%! I do not know any other professional field where the learning could be counted for so little! Even in arts! Where goes the most of the time of a concert pianist? How many hours of performances are next to preporation? I guess, "talant" and "love for acting" do not ask for training...

I started my biomechanics pages to point that "talant" is this "love for acting" -- and learning to act is everything. Well, the 11% do have a chance to become professionals. This is sounds right...

Biomechanics (BM) is a METHOD of physical acting. If the Method Acting (Stanislavsky) approaches the process from "inside out," BM -- from "outside in"...

This is a new gate to BM directory @ GeoAlaska (Geocities-Yahoo), which replaced Theatre w/Anatoly @ theGlobe. Well, there are some changes. Bad news: many pages got lost during the relocation. The good news: I paid for the new address vtheatre.net and hope that it prevent me from the pain of losing pages. Now, the original Biomechanics directory (BM) is still at the Tripod and I am not working much on it... because I want to bring the two together: BM + Method = BioMethod! I try to do in act.vtheatre.net (do you see the banner?)

I do BM in my classes for years, but never thought about this "Anatoly's Method"...

To avoid any charges in not representing Meyerhold the right way, call it "Biomechanics w/Anatoly"! 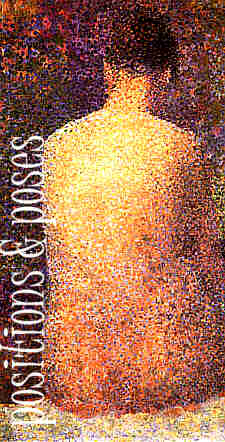 Think in pix!
[ the "subjects pages" -- acting space and time, bodymachine, mise-en-scene for actors and etc. -- are in the old (main) BM directory: filmplus.org/biomx ]

I hear myself screaming in class: "Visualization!"
What do I mean?
Physicalization and Vocalization!
"I don't see it!" Stanislavsky cried too.
Well, friends, this is SHOW business! (I try not to use word "audience" -- from listeners; now you can imagine what kind of actors the Greeks were).
Here Method Acting usually runs into first big problem. Did we say "from inside out" (Method)? Psychological Realism... What if it's only "inside"? What if we do not see what is inside?

MEYER. Stop, stop it! What is that? This naked woman! I like art, but what does she has to do with biomechanics? Who did put her here?

ANATOLY. Me, sir. To demonstrate the forth point of acting cycles; the full stop. That actors must think not only about the dynamic elements, but also the static once -- that's why "positions and poses"...

MASTER. But a woman, not a man?

MASTER. It could be destructive, you know. You didn't do at "his" method pages.

ANATOLY. I will put some closeups there too. I'm working on it, sir.

BM -- antirealistic system of dramatic production developed in the Soviet Union in the early 1920s by the avant-garde director Vsevolod Meyerhold. Meyerhold drew on the traditions of the commedia dell'arte and kabuki and on the writings of Edward Gordon Craig for his system, in which the actor's own personality was eliminated and he was entirely subordinated to the director's will. Coached as gymnasts and acrobats and emphasizing pantomime rather than words, the actors threw themselves about in puppetlike attitudes at the director's discretion. For these productions the stage was exposed to the back wall and was then furnished with harshly lit, bare sets consisting of scaffoldings, ladders, and ramps that the actors used. Biomechanics had lost its appeal by the late 1920s, though Meyerhold's emphasis on external action did become an element in Soviet actor-training techniques. (Britannica)

Medical: Biomechanics deals with all aspects of biological systems. Life expresses itself in movement, mechanics describes movement - this lies behind the term biomechanics. Movement occurs only when forces are acting. These can often not be recognized let alone appraised by the naked eye. The magnitude and direction of forces acting on the body contain valuable information for orthopedists, coaches, shoe manufacturers, ergonomists, neurologists, car makers and many other specialists in the broad interdisciplinary field of Biomechanics.

Comedy: use the scenes from The Importance of Being Earnest, Mikado and 12th Night

Looks like that this directory will be "text-only" version of the old BM @ Film-North.

I'll make the page "Students" for general questions about BM.

I have questions. A lot of them. In fact, I have nothing, but the questions.

Need to know the basics of the script analysis in order to apply BM.

Must read Acting One pages first!

.... Very difficult, if not impossible to teach BM, if they don't know Method. Or at least you should be aware of Method's limitations.

* Spring 2004 updated. Next time -- Spring 2005. The old BM directory is not directly connected to my live classes (THR221 Intermediate Acting) and I will be working on pages over there between the Theatre UAF offerings.

I have too much on my plate right now -- and, regardless how much I wish to complete BM textbook, I do not have a few months to work on the manuscript. In addition, I keep enlarging the body of the "Biomechanics for Method Actors" with new parts (most recent -- Yoga for warmups more or less familiar to students). Besides, so many compositional elements I had in mind are not developed ["Symposium" -- the dialogues with "Master" (Meyer)].

I need them for the style (or tone) of the narrative; I would Meyerhold's voice to lead the "story"... BTW, what is the story?

I suspect that the problem is in "BioMethod" (THR121 Fundamentals of Acting); the field of acting is not established. The gods, other characters and even the four (five) acts structure isn't defined (still "parts" and "chapters" instead of scenes). I hope that at some moment the editing will take care of the mess.

Big issue: it is a book, textbook, or workbook?..

[ I'll keep the questions to myself in Notes and other directories: Theatre Theory, The Book of Spectator, Virtual Theatre. ] 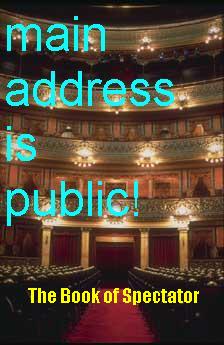 House is Pregrant with Stage!
Mini-test (what do you know about the Fundamentals of Acting):

* Who is Stanislavsky and what are the main points of "Method Acting"?

* Do you have a comedy monologue to audtion for BM class?

Meyerhold: "Actor lives on stage a double life, he lives in two worlds -- in the world of his role, he created; and in a world of his own `I.' He is an executive, a manager; sometimes an adventure seeker, sometimes a prophet, he knows how he has to re-distribute all he needs." Eiseinsten's Notes on Meyerhold.

How do you understand this statement? Post your "100 words" to the BM 12night List * WEBMASTER: Anatoly, please, please, let me fix the layout! Let me hyperlink everything! Stop throwing new images at me! You have no regard for readers, sir! Let me workout the templates! Let me clean the pages, I beg you! Please, please, we all ned it -- some peace...

ANATOLY: Sorry, folks. I have to do it. So many really important things are missing. The stories, symbols, heroes. Everything should be visible -- why can we have it in pictures, like the Greeks? Gods of motion, angels of space and time, sons and daughters of demons, the struggle, the passions... I know that the forms are out there, I simply have no time to notice and recognize them. I hear the sounds, the music...

MASTER: Anatoly, who is talking on stage?

SMIRNOV. [Teasing her] Silly and rude! I don't know how to behave before women! Madam, in my time I've seen more women than you've seen sparrows! Three times I've fought duels on account of women. I've refused twelve women, and nine have refused me! Yes! There was a time when I played the fool, scented myself, used honeyed words, wore jewellery, made beautiful bows. I used to love, to suffer, to sigh at the moon, to get sour, to thaw, to freeze. . . . I used to love passionately, madly, every blessed way, devil take me; I used to chatter like a magpie about emancipation, and wasted half my wealth on tender feelings, but now--you must excuse me! You won't get round me like that now! I've had enough! Black eyes, passionate eyes, ruby lips, dimpled cheeks, the moon, whispers, timid breathing--I wouldn't give a brass farthing for the lot, madam! Present company always excepted, all women, great or little, are insincere, crooked, backbiters, envious, liars to the marrow of their bones, vain, trivial, merciless, unreasonable, and, as far as this is concerned [taps his forehead] excuse my outspokenness, a sparrow can give ten points to any philosopher in petticoats you like to name! You look at one of these poetic creatures: all muslin, an ethereal demi-goddess, you have a million transports of joy, and you look into her soul--and see a common crocodile! [He grips the back of a chair; the chair creaks and breaks] But the most disgusting thing of all is that this crocodile for some reason or other imagines that its chef d'oeuvre, its privilege and monopoly, is its tender feelings. Why, confound it, hang me on that nail feet upwards, if you like, but have you met a woman who can love anybody except a lapdog? When she's in love, can she do anything but snivel and slobber? While a man is suffering and making sacrifices all her love expresses itself in her playing about with her scarf, and trying to hook him more firmly by the nose. You have the misfortune to be a woman, you know from yourself what is the nature of woman. Tell me truthfully, have you ever seen a woman who was sincere, faithful, and constant? You haven't! Only freaks and old women are faithful and constant! You'll meet a cat with a horn or a white woodcock sooner than a constant woman!

POPOVA. Then, according to you, who is faithful and constant in love? Is it the man?

POPOVA. The man! [Laughs bitterly] Men are faithful and constant in love! What an idea! [With heat] What right have you to talk like that? Men are faithful and constant! Since we are talking about it, I'll tell you that of all the men I knew and know, the best was my late husband. . . . I loved him passionately with all my being, as only a young and imaginative woman can love, I gave him my youth, my happiness, my life, my fortune, I breathed in him, I worshipped him as if I were a heathen, and . . . and what then? This best of men shamelessly deceived me at every step! After his death I found in his desk a whole drawerful of love-letters, and when he was alive--it's an awful thing to remember!--he used to leave me alone for weeks at a time, and make love to other women and betray me before my very eyes; he wasted my money, and made fun of my feelings. . . . And, in spite of all that, I loved him and was true to him. And not only that, but, now that he is dead, I am still true and constant to his memory. I have shut myself for ever within these four walls, and will wear these weeds to the very end. . . .

final exams together on stage!