Well, this is another BM directory (I call it BM+); I need it in order not to mess the old BioMX @ filmplus.org. Besides, I want to keep two levels of complexity separately. Like Acting I and Acting II. BTW, I teach biomechanics mostly in Acting II classes (THR221 Intermediate Acting).

I will be bringing together Stanislavsky and Meyerhold, since I use both and since I would like to organize them as the ONE System (in Acting ONE I call it "BioMethod"). Did you read the title page?

Probably better, if you start with the old BM directory, or even with act.vtheatre.net, Fundamentals of Acting. Or maybe with the first original page, which started everything: ACT... Wait! Perhaps, Brecht page in script.vtheatre.net is a good beginning...

One way or another we need to introduce a few non-Aristotelian principles. Remember "episodic structure" in epic theatre? Should we now talk about "episodic acting"? What about acting for the camera?

In his book "Five Approaches to Acting" David Kaplan gives the definition of The Basics of an Episode:

What an episodically structured performance does is act out a story, or sequence of events, rather than attempt to perform a plot linked together by cause and effect. In theory, each event in a story can be understood separately from the sequence. (62)

Well, I rather call the cause-effect sequience a STORY, but you got the point: "Performed onstage -- no matter why -- an event becomes an episode"

Maybe your experience clocking TV remote could provide a better image of "episode" -- relative independence from the rest of the whole. Or should we say that this whole is constructed differently?

Each episode have a central gesture: look at the picture!

[ Actors, take one character from the pix (old paintings) and think how did we arrived to this position? Directors, think about the group composition. ] 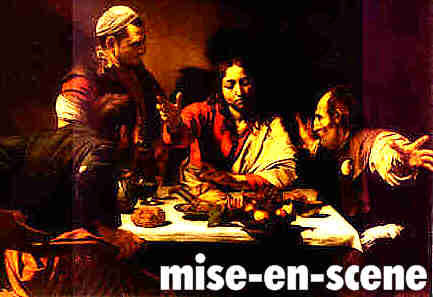 Not only the central theme/image, but also each episode can be reduced to CAPTION. (Consider watching a show from the fast moving car!)

Since we have such "broken" into pieces narrative, we need to have strong TRANSACTIONS. Here comes in somewhat complicated concept of gest! (Kaplan: gest -- the moment between people when the trade is made or denied). Plus, the object lesson -- use of a physical object to demonstrate the gest...

Transaction -- the underlying structure of behavior; trade; something is bought or sold.

Caption -- the summary of the event in the episode.

Demonstration -- making the episode clear to the audience...

Did I mention that Brecht (and Meyerhold) were Marxists and even Communists! "Trade, conflict, sold"...

On title page I wrote that only 1 in 10 has a chance to become professional actor... Looking at BM poll, maybe I should say one in 100? Any success is in the attitude. I need to check other polls; perhaps the ratio is one in 1000?

Listen, ask in your philosophy class about the Dialectics (Hegel) and we ready to talk about this famous Brechtian A-affect, "A" (Alienation), or even E-strangement (estrangement -- in order for us to notice something we are used to: making the familiar strange).

It's not that new: Shakespeare used episodes (and this is why Tolstoy hated Shakespeare). This very economical way of narrative; like in movies we cut out everything that is not important for MESSAGE. Remember, old Aristotle? Epic Theatre is Idea-oriented play-writing!

Opposition -- contradictions, simultaneous or sequential, deliberatly included in a performance in order to create a dynamic fusion of opposite forces (Kaplan)

In their 1920s both Brecht and Meyerhold watched too much cinema. They wanted to replace the traditional organizational environment (space) with the new one -- time. This is why "expressionism" and "constructivism" and so on. In film industry directors cry "CUT!"

Aha, this is how "director's theatre" was born... The Spectacle, the last in Aristotelian list of the main principles (Poetics) became the FIRST.

On Grotowski: Without an actor there is no theater...there is "literature" but the word has to be made flesh. Literally. Period.

You can think of the "text" as the skeleton or "blue print"...

It's about archetype and how one can reach that level in performance.

Grotowski tried to continue the Stanislavsky's later period (Method of Physical Action, Meyerhold's theatre was closed already), but we must remember that Method is full of spiritual and even religious energy (Christian heritage). How do we get to the level of "archetype"? Start with types and even stereotypes!

I see that BM pages are popular and I thought that will work on them while teaching THR221 Intermediate Acting Spring 2002 (reserving THR321 Advanced Acting for Method). Six weeks into a semester I can't get to it, because we need to cover the essentials (the Acting One territory). I know that I already ran out of time; we had only one class on "cycles" -- and it's fun, but the whole "system" of BM is based on physical repetition and "knowing" about it does little.

For me: I pointed new flash banner "biomechanics" to this page and I better remember to keep it updated!!

MASTER (Meyer): Dear Teacher, the historical time was moving so fast in Russia, every decade the new theatre forms were born... And the theories ran into each other. The times were too radical. At the time it looked like my theatre is the opposite of your school, but in fact I was advancing your system...

TEACHER (Stan): I know, my friend, you did what I was asking -- to create your own method.

Maybe "summary" should be the last on the page -- because "notes" must cover what to do. What to do, when they hadn't try Method, before they understand that they need BM? I had a strange conference with a directing major in my acting class: how to apply Method or BM, working with actors.

Acting is a profession.

Profession is a craft.

Craft is a practical knowledge.

Learning is a labor.

Do you have this talent to learn?

Talent asks for a commitment.

Do you have the time to be an actor?

Do you have the will?

The BM were born at the End of Language, Novel, at the Era of Film, globalization and needs for the new universal language as always at the times of the great historical changes and mass migrations. I should mention materialism in many forms from Marxism to Objectivism. And of course the revolution in science and technology, when the matter became equal to energy (Einstein). The physicality of the world was under the centuries of rediscovery since the early modernity (the Age of Reason instead of the Religion). Physics became the new religion of the century. Why should we be surprised that the physical theatre came on stage? Was it a conflict with the "spiritual" -- according to the ideologies of the time, the physical was the only true form of the ideal! [ Physical Theatre page ]

Meyerhold believed that Actor is Artist and everything that applies to a composer or a writer, does work for actors. If we to accept the notion that any performance is a "composition" -- we can see how useful the Concept of Chronotope is.